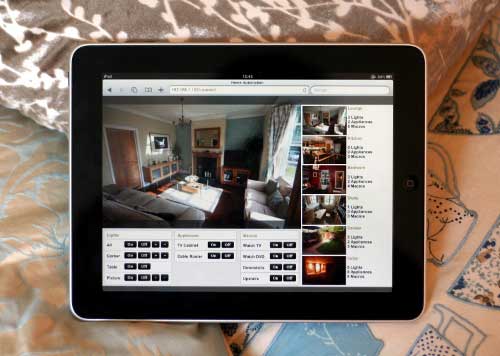 We’ve been contacted by Automated Home reader (Mr Flibble) on his interesting step-by-step guide on building a custom iPad web app for the X10 CM15 Pro on Mac OSX.  Even more interestingly he plans to release an open source version soon….

“…The best part about being able to write your own PHP is that you can make an interface that ideally suits your house and how you naturally want a remote to look.  I thought at first about making an iPad version of Domia’s 10″ PictureTouch using photographs and imagemaps, but I decided to make it a bit more advanced than this.

I wanted it to look vaguely like a native iPad app and whilst I thought about using a framework (if I had several weeks to kill I’d reverse engineer AdLib) I decided it’d be quicker to make up my own interface with images and text.  I designed it on Firefox a couple of days before getting my iPad, then did some final tweaking when it arrived. I wanted an interface that would fill the entire browser but not require scrolling.

I wrote the initial interface for landscape mode, which I plan to be in most of the time whilst using the device. Annoyingly Apple decided not to make the screen 16:9, but I came up with a way of fitting everything on…”