Submission by Naveen Kumar – The average consumer owns at least one computer, games console or TV. Now playing high quality games or watching DVD movies on big screen TVs or monitors is fine, but when all you have to listen to those explosions and music is 2 stereo speakers and you keep getting killed because you didn’t hear that marine sneak up behind you or that startling effect you saw in the cinema is just another moment to yawn through when you watch the DVD then it’s time throw them in the trash, get up out of your armchair (or wherever else you like to relax) and pick up a set of the Cambridge Soundworks DTT3500 Digital Speakers.

At £299.99 these speakers can reproduce near cinema sound through the 5 small cubic speakers (satellites) and the subwoofer.  However, unlike other speakers which have the amplifier built into the subwoofer, the DTT3500 also comes with a stand alone Digital Amplifier. This, along with boosting the volume to the speakers also includes a Dolby Digital decoder that features a 24 bit Digital to Analog Converter (DAC). This DAC is also used when connecting the box to a Sound Blaster Live line of cards with Creative’s DIN connector.

The decoder/amplifier box can be placed both vertically (with an included base stand) and horizontally. The front of the decoder is a removable faceplate. By default the system ships with the horizontal faceplate mounted, but a vertical face place is bundled with the system and it only takes a matter of seconds to change them around. There are 5 different faceplates included. All with cool designs that go with the theme of any room.

On the front of the box you will find a number of soft touch silver buttons with the following functions along with a lot of green lights to tell you what the system settings are:

There are also 3 dials to control the volumes of the subwoofer, center speaker and surround satellites. There is also a motorized master volume control button (indicated on the box by the blue LED) which can both be turned by hand or by the wireless remote also provided. The separate volume controls for subwoofer, rear and center speakers in addition to the master volume control allow you to have significantly louder or weaker sound from the rear and/or center than from the front or even make the rear and/or center speaker completely silent. However, it’s not possible to make the front speakers silent short of unplugging the front speakers from the amplifier. So positioning can be everything to get that perfect sound. 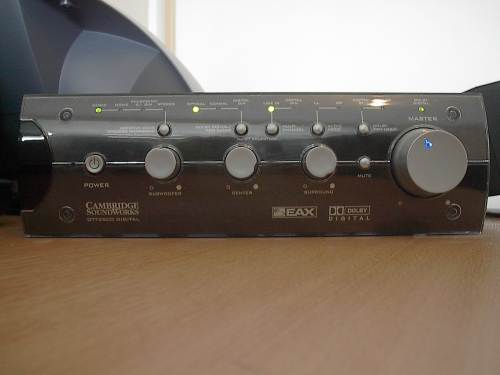 The ports on the rear are:

Optical Input (for the xbox, PC, PS2 or any other piece of equipment that has optical output)
Coaxial
Analog Front and rear inputs for older soundcards or for computers with soundcards that do not support any other input method. Can be coupled with other inputs e.g when speakers are used in conjunction with the Creative Sound Blaster range
Digital DIN input. Used with the SPDIF port on the sound blaster cards to produce AC3 Sound as well as analog sound. The main difference of using this port as opposed to the analog ports is that the DAC of the DTT3500 is a higher quality than that of the Sound Blaster card. So the sound produced from the speakers is of a better quality since the signal is kept as digital until it leaves the electrically noisy environment of the computer case The input ports are neatly placed at the top of the box while the speaker output ports are lined up at the bottom. Also provided are little stickers to put on both the speakers and the wires so as not to cause confusion if more than one wire is accidentally pulled out.

There is ample space between each of the ports. I for one like to hook up my computer to the analog ports to listen to music but also have my CD player and/or laptop plugged in as well so I bought one of those 3.5″ jack splittlers so I could plug 2 or even 3 devices into one port. It works perfectly and I can still access all the other input ports without accidentally pulling out any wires. 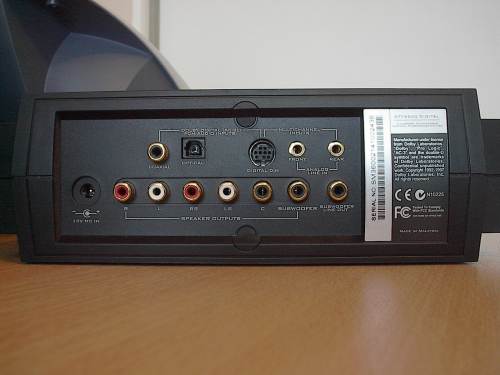 There are dozens of different sound and connection combinations, For example if you wanted to listen to some music on your PC connected via the DIN port while playing a game on a separate console connected via the optical port all you would have to do is press the button on the amplifier until the green LEDs are on both DIN and optical and voila, you can hear both sound sources at once!

The other mode change new to the DTT3500, but common to most home theater Dolby Digital receivers is a compression mode (called Dynamic Mode by Creative). This can only be accessed by the remote and you can tell if it’s on or off by the series of lights flashing on the box (top/left = on, bottom/right = off). The system by default uses the compressed mode (called late night mode on some other systems). Dolby Digital soundtracks can have a very wide dynamic range between soft and loud sounds. When using a very good speaker system at loud volume this can provide fantastic sound that comes close to a truly theatrical experience. However when playing late at night the dialog can be hard to hear, and subtle low-level effects may get lost or alternatively the loud parts will wake everyone up. If you are using the system in a larger room where you are pushing it’s limits the peak levels can also distort the system. Compressing the dynamic range means turning down the volume on just the loud effects while you turn up the volume on quiet sounds, and keep the dialogue at the same level. The amount of compression is decided in advance by the soundtrack’s producers, and coded right onto the soundtrack. For example, if there’s a loud sound coming from the left surround that’s meant to startle the audience, the soundtrack mixers might indicate less compression for that sound than other loud sounds when you select the compression mode.

The remote also offers access to a speaker-test button that you can use to make sure you placed the speakers properly and connected them correctly to the box. Unfortunately the test cannot determine if you connected the box correctly to your computer or other source.

There are several options to connect the DTT3500 to devices such as sound cards, hardware MPEG decoders, external DVD/VCD players, games consoles, etc and everything you might need to pull off the connections can be found in the box. Specifically Creative includes the following connections with the speakers: 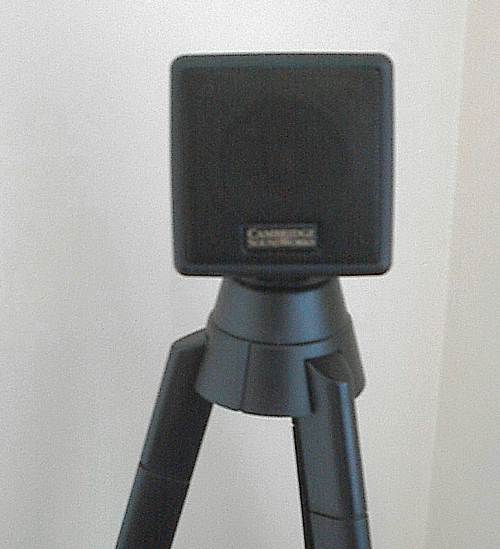 Another useful feature is the ability to wall mount the speakers. Creative have also included screw holes in the back of their satellites as well as two tall stands for the rear satellites. These stands can be put together and dismantled easily and can be set at two different heights. Rubber feet are included so that the speakers and stands aren’t damaged if placed on the floor.

Advanced as the decoder/amplifier is, the only thing it lacks at the moment is the ability to decode DTS sound. Other than that, this is a good purchase, combining cost effectiveness with great cinema quality sound and is definitely something to get if you’re looking to create a home cinema or just if you like watching TV.