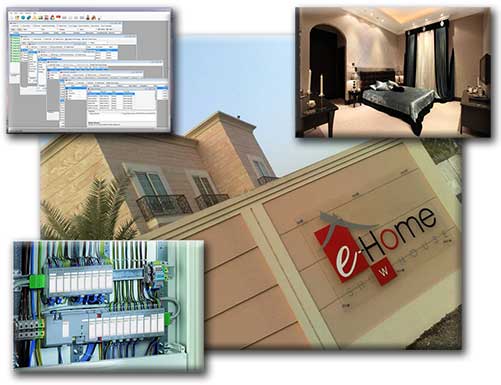 There’s been lots of interest in the e-homeautomation.com smart house we featured from from last weeks Gadget Show.  We asked e-Home to give us some details of the systems employed in the project and they’ve kindly submitted a case study of their install.  Read on for all the behind the scenes info and photos on this £25,000 system.

The e-Home SHOWHOUSE in Dubai is a cutting edge, dedicated facility for showcasing the wired, wireless and software-based control systems that the company has developed through in-house research and development.  Designed to educate the public, property developers and integrators, the installation presents the automation possibilities for their own projects. The SHOWHOUSE has become an emblem of state of the art technologies developed by an indiginous GCC company, and has featured on several local, regional and international television stations.

The SHOWHOUSE is a fully-automated property where clients can view the automation and integration potential of the e-Home range of systems. The project was designed and commissioned in-house, with the aim of creating a system that used as much useful integration as possible. Combining smart home systems, digital home applications and unique solutions for the local market, including Islamic content, the installed system gives a high-end feel, despite using components in the mid-range price spectrum.

Whilst many own-brand systems have been used, the installation also integrates systems from e-Home Technology Partners, including Cytech, Opus, Impro and Amulet Devices. The beauty of the e-Home CONTROLS software platform is that it works with a variety of third-party systems, including commonly used technologies such as X10, C-Bus and Rako. This means that users can obtain similar degrees of control whether they choose to use e-Home control hardware or not. 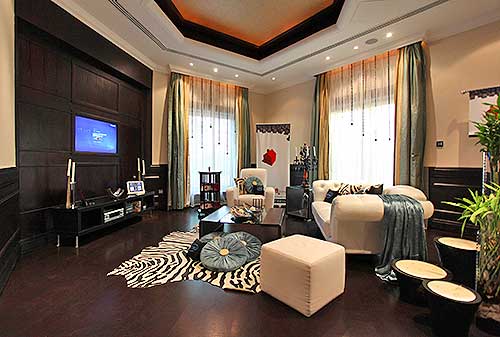 Designed by e-Home personnel, the project benefitted from the experience of architects, engineers and draughtsmen. As the villa was renovated from scratch for the installation, the project was a huge undertaking, also employing builders, carpenters, interior designers, electricians and decorators. 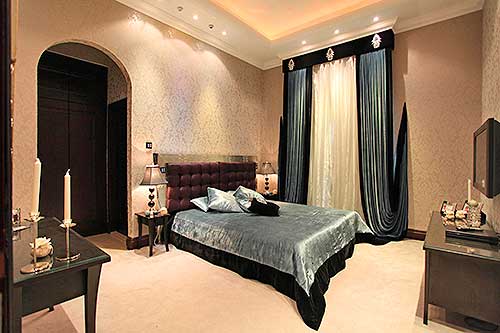 This bed has two motorised mattress supports which can be
controlled independently by the e-Homegreen automation system.

As the system is hardwired, it had to be retrofitted – no easy task when the walls are solid concrete! However, the end result was worth the extra effort. The installed systems include the e-Homegreen system, which provides full control of lighting, various appliances and integrated HVAC control. In addition, access control, motorised curtain rails, security, digital surveillance, multi-room audio/video, digital media and home theatre are all integrated together. 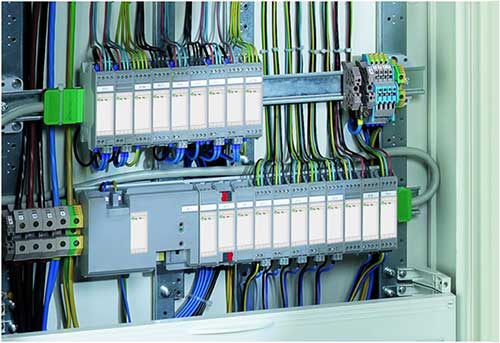 The e-Homegreen control hardware is housed in an enclosure in a dedicated room
adjacent to the distribution board. It contains din rail mounted dimmers and relays
for light and appliance control. As per local electricity board rules, there are
three phases per distribution board, making good design essential for a working system.

Control is provided by an in-wall touch screen, LCD switches, a Media Center interface (which also runs on Xbox), remote control, SMS and even voice commands. All hardware is designed to run independently of the e-Home CONTROLS software platform, which provides an extra layer of integration and accessibility.

The biggest challenges were retrofitting the cables and conduit into the solid concrete construction. Additional obstacles included the types of integration that many of the manufacturers had never seen before. This included interfacing the access control, paging and multi-room audio/video system to the centralised e-Homegreen system. This allows the triggering of various components such as text or picture pop-ups on the LCD screens via Media Center, audible notifications and alerts through the speakers, and sending messages to pager handsets and mobile phones. 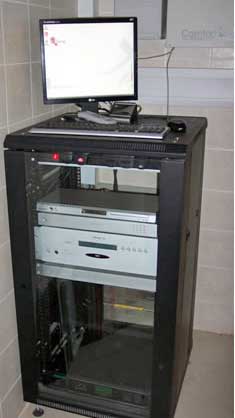 There are several useful applications for this. For example, when the owner enters his/her access code to enter the villa, or when a guest presses the security button at the front gate, the presence of someone at the door will be announced by the system through the speakers.

Another integration challenge was synchronising all of the motorised doors, gates, curtains, projector lift and projector screen with the automation system in order to know the exact open or closed status of the devices. Further, a standard Jacuzzi was integrated into the automation system with full control over incoming water flow, water temperature and drainage. This also allows switching the hot and cold water supplies for summer and winter periods. It also means you can run a bath on the way back from work by SMS, PDA, iPhone or PC! 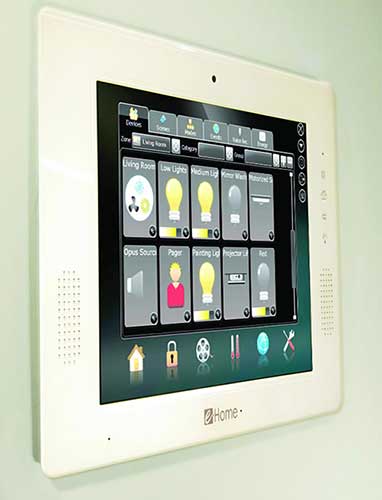 Implementing the project was a great experience, both for e-Home and our Technology Partners. As noted above, there were many integration features which had never been used before, often making maximum use of many systems’ capabilities.  For example, using certain outputs from the e-Home security system will trigger the e-Homegreen automation system and the Opus multi-room system to flash the outdoor boundary lights and produce a siren from the in-ceiling speakers whenever a security or other alarm signal occurs.

An interface was provided that allowed integration of the security, automation and irrigation system so that if the system detects movement in the garden (for example when guests arrive) it will automatically turn the irrigation system off to prevent an embarrassing dousing of the guests.

Watch the e-Home System on The Gadget Show

Being a state-of-the-art facility, the SHOWHOUSE has been continuously upgraded and improved, especially the interfaces for the e-Home CONTROLS software. New features include iPhone and iPod Touch control, energy monitoring and saving, a unique integrated pager system designed for the local market to contact servants and drivers, and full control of Media Center by touch screen and voice.

The system has proved to be steady and reliable, with virtually 100% uptime. The biggest issue was getting the projector back from the manufacturer after it was sent back for the filter to be replaced!

The demonstration facility has been universally well received by journalists, retail clients, property developers and industry professionals. Many people who visit are amazed that such technology is available today, believing that it is something that only exists in movies. The facility has been seen by many VIPs in Dubai, and has been filmed for local, regional and international television stations on a number of occasions.

e-Home AUTOMATION is a leading provider of Smart Home technologies. Their systems are designed to allow seamless control of all aspects of a property, including lighting, climate, appliances, curtains and blinds, multi-room audio/video, security, digital surveillance, entertainment, community applications and energy saving.