[UPDATE – Check out our Review of the Elgato Eve Energy]

And since Eve Energy doesn’t need to constantly interfere with your other wireless devices, you’ll actually be able to consume less energy, not more. 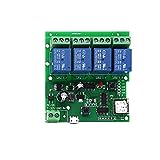