iPort are releasing two new in-wall mounts this month for the iPod Touch and the iPad.  The CM100 and CM2000 use wall mounted chassis and a magnetically attached front surround and turn the Apple devices into touch screen for smart home control.

“iPort, the inventor of the world’s first in-wall system for the Apple iPod, is once again poised to advance the integration of Apple products for the custom installation industry. In July, iPort will begin shipping the first two products in its new Control Mount Series for the Apple iPod touch and iPad.

The iPort CM-IW100T (CM100) Control Mount for the iPod touch encases an iPod touch in a wall-mounted chassis with a magnetically attached, rectangular fascia, as does the iPort CM-IW2000 (CM2000) for Apple’s iPad, transforming the handheld devices into in-wall touchscreens running apps from any control system over WiFi.

In addition to supporting the iPod touch as a 4-inch touchscreen controller, the CM100 also allows for audio playback from the iPod touch for both stored music and streaming audio from any capable apps available. With the rapid growth in home automation apps, the CM100 and CM2000 give Electronic Systems Contractors an attractive mounting solution that can be sold to clients who might not otherwise be interested in a traditional and more costly proprietary touchscreen – “From the very beginning of iPort, it has been our mission to help the custom installation community embrace and profit from the adoption and integration of Apple products,” said Ari Supran, CEO of iPort’s parent company, Dana Innovations. “As Apple’s products have evolved from media players to intuitive user interfaces, we remain committed to helping custom installers integrate these products into their clients’ homes in a way that is aesthetically compelling and easy to use. Typically, there is not a profit model available to the CI dealer for an Apple product. By bundling an iPort Control Mount with an Apple product, the dealer can—as with all of our iPort in-wall and free standing docks—integrate Apple products and realize profit from the sale of an iPort product,” Supran continued.

Use of an iPort Control Mount for home automation is convenient for room control of audio, video, lighting, and climate, as supported by the control app. Both the CM100 and CM2000 can be installed in a vertical or horizontal orientation, depending on the functionality of the user’s preferred apps.” 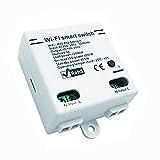