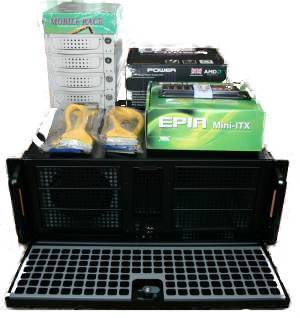 [UPDATE – After you’ve read this, jump to our updated JukeBox MkII article]

Old Timer – Since ripping and centralising all our DVDs and CDs a few years ago our “Jukebox” server had grown and grown and was in need of replacement. With 5 years of digital photographs taking up 10s of gigabytes alone and ripped DVDs taking anywhere from 3gig to 9gig each!, no matter how much disk space you have it never seems quite enough.

The donated ancient motherboard and RAM that I had received three years ago had performed well. Despite being a lowly Pentium Pro 200 with 128meg, it had coped admirably with serving multiple PCs, Xboxes and other IP clients. However the drive bay configuration in the old AT rackmount case (that had been “modified” with a hacksaw to allow the ATX board to be fitted) meant there was no room left to add any more hard disks, and keeping the drives that were already in there cool was becoming a major issue too. 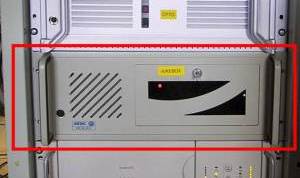 NASty – In my hunt for a replacement I considered buying the Buffalo Terastation NAS (network attached storage) device. This gives you 1 terabyte of drive space in a small, quiet, stand alone box for under £700. A nice option, but more than I wanted to spend. I also have plenty of large drives to re-use out of the old Jukebox, as well as some smaller 120gig and 160gig drives that I wanted to utilise too.

Hardware – After getting some input from the guys on our Mailing List and IRC Channel I finally settled on the Compucase S411 4U Rack mount case from xcase.co.uk. There are many better, beautiful rackmount cases out there with caddies included etc, but they are way beyond my budget. This case costs under £90 and allows me to fit 6 drives in caddies all accessible from the front of the machine, with space for at least another 6 drives internally if required. Be warned this is a full depth case and requires a large rack to accommodate it. It also weighs 23Kilos with the 8 drives fitted.

I chose an EPIA motherboard with the VIA M10000 (1Ghz) Nehemiah CPU. This tiny little main board is a big improvement in terms of speed on the previous VIA machines I’ve owned (500Mhz and 800Mhz). Although it only has one PCI slot (it can take a dual riser in the appropriate case) it already features pretty much everything you need on-board – 10/100 LAN, USB2, Firewire, Graphics, Sound. The PCI slot is used for the Promise TX2 IDE controller card I was already using in the old Jukebox machine. 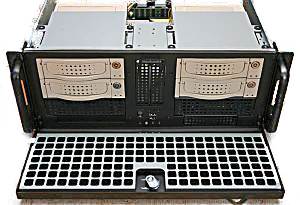 (click to enlarge)
Some of the Caddies in Place

This card along with the 2 IDE channels included on the motherboard allowed me to connect up 8 IDE devices. To reach the full potential of 12 drives in this case, you would need to replace the IDE controller card with a more expensive one with more channels. You could also change the IDE controller for a SATA one if you are buying new drives. One of the biggest advantages of this setup is the running costs. The EPIA board is a miser when it comes to electricity usage when compared to most modern boards/CPUs. In a server running 24/7 that has to be a consideration.

I had some old IDE caddies spare which I used for this project. Using caddies has several advantages:- 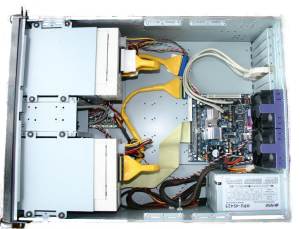 (click to enlarge)
Spot the Tiny EPIA VIA Motherboard!

Although the fold up case front does just close with the caddies in place I decided to remove it for convenience – it’s really so I can see all the Flashing Lights!

OS – Rather than take up a bay with a CD-ROM drive I just hung one out of the case temporarily to install the OS and then disconnected it when done. I chose to stick with Windows XP Pro as the OS, despite protestations from my “mates” on the IRC channel. I need to run a couple of other apps on my jukebox that run under windows

and whilst I could probably have found Linux alternatives, I’m still pretty much a Linux virgin and so have stuck to what I know. I need good control of the rights for the jukebox data. I want my 4-year-old to be able to access media from his PC, but not delete it! Anyway, here are a couple of interesting NAS specific OS’s which the more sandal wearing amongst you may like to try 😉 NASlite – Open Filer .

I haven’t employed any kind of RAID in this new setup. Experience here seems to differ quite a bit, but I seem to have heard more horror stories of people losing data with RAID than saving it. Problems with cheaper RAID devices that are typically used in a home servers often mean you lose the data on all your drives, rather than just the one with the problems. I backup the “data” nightly to another PC in the rack (that is documents, digital photos etc), but the “media” is not backed up at all. I own the originals of the CDs and DVDs so putting them back on the server isn’t a problem, except for the inconvenience and time factor. There’s no practical, cost effective way of backing up such a large volume of data that I’ve found. 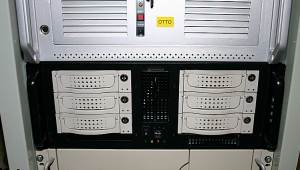 Problems – With some very un-scientific testing using a small piece of paper, it’s clear the fans in the front of some of my caddies are on their last legs. I am currently investigating replacement caddies and this Vantec MRK-102FD looks just the job. Although not a problem for me as my Node Zero is a small area off our garage, this box does sound a bit like a jet fighter taking off. With thismany drives and fans you won’t want this case in the cupboard under your stairs.

Conclusion – As the saying goes there are many ways to skin a cat, so this setup is just what is suitable for me. If I didn’t already have the drives I would have possibly gone for the Terastation. Or perhaps I’d have gone for the same setup but with new SATA drives instead of PATA. My switch has two Gigabit ports so it would have been nice if the built in Ethernet on the motherboard supported this too, although in realty I have no issues serving multiple clients simultaneously over the 100meg LAN. In the end though it’s hard to beat the flexibility of this setup. Its easy to replace the drives as bigger, cheaper ones become available. Even changing the whole thing to SATA isn’t difficult requiring a change of PCI card and caddies. Now, roll on next years 800gig drives at £200 😉

[UPDATE – After you’ve read this, jump to our updated JukeBox MkII article]