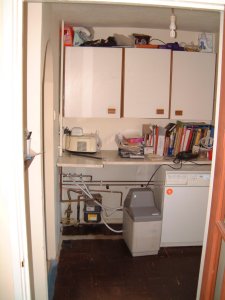 “The first task was to pay Transco to move the gas meter. It cost just over £200 to do, and it is now situated on the outside wall where it belongs. The wall cupboards were taken down from the kitchen and temporarily put here to provide some interim storage. Seven years later…. Yes, you’ve guessed!
With the gas meter out of the way, it was time to fit some power sockets where they would be useful – above the work surface. As the washing machine will be better integrated, I’ve fitted an unswitched socket underneath where the work surface will be, and a 20A DP isolating switch above.

I also decided to bite the bullet and install some CAT5 cable. I bought an ePODS device earlier this year, and have decided that it would look good here. Perhaps it will even be used for browsing recipes.”

Be the first to comment on "James Hoye Loses CAT5 Virginity"