“Call it a Leviathon, Nemesis or Elephant project, but any way we measure it, the WebBrick 6 is our biggest development project to date.

The key movement from the venerable WebBrick 5 Series was to build the 6 as an installers automation Appliance.

This meant a change away from the Molex style connectors to the Phoenix style rising clamp connectors. (If you’re an OEM customer, please don’t worry because the WebBrick board uses dual 40 IDC Headers). We reckon we can hear the installer breathing sighs of relief from here!

We also wanted to increase the number of IO connections and roll up some of the firmware improvements we’ve made in the 5 series, specifically… o 5 Temperature Sensors with 0.1 Deg C Resolution
o 4 Analogue Inputs
o 4 Analogue Outputs 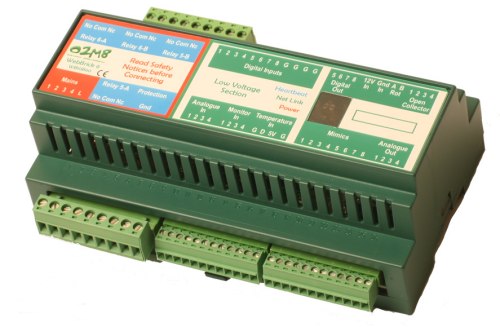 The 6 Series is built as an IO board and a WebBrick board. The IO board has been key to building direct interfaces with the outside world, namely:

New Software Features – We’ve put so much effort in to the WebBrick 6 release, all of it based on customer feedback, the most important new features are:

o Schedules – WebBrick 6 can now run its own schedules, so it can be left to get on with daily tasks ad infinitum.
o Scenes – one input event can now set the output state and level of every single digital and analogue output.
o Actions – there’s new actions like set Scene, Next and Previous
o Thresholds – we had a two sets on WebBrick 5, now they are available on every temperature sensor and analogue input.
o Password – we added configuration security to the WebBrick – you have to login before configuration can take place.