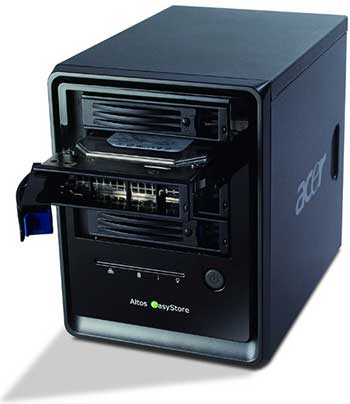 The home NAS market has never been better served and here’s another interesting proposition.  Acer have up’d the capacity of their easyStore to 3TB, making it a direct competitor to Drobo (look out for our in-depth Drobo review coming soon).

“Acer’s been pretty low-key with its SOHO-targeted Altos easyStore NAS offerings, but it’s not just letting it wither away either, upping the capacity today to a max of 3TB. The black four-drive tower features a web interface to disk options like RAID levels and automatic backup schedules, and Acer bundles in a bootable CD that allows you to restore from catastrophic system failures.

It’s not clear when the 3TB easyStore is going to make it out, but the 2TB version has been available for large discounts and garnering decent reviews since August, so you may want to start poking around if you’re looking to jump aboard the NAS train.”

Be the first to comment on "Altos easyStore 3TB NAS"