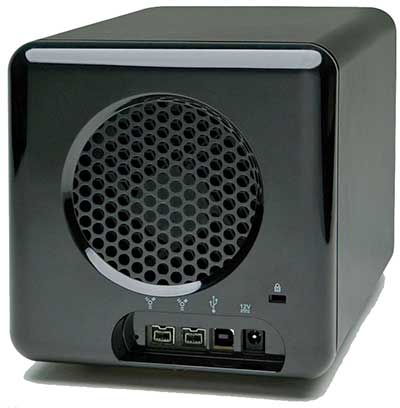 Data Robotics gave Automated Home their first interview outside the USA on their new and improved “storage robot” last week.  Today we can reveal details of the brand new MkII Drobo which will replace the older unit with immediate effect.

DR say that improved speed is the number one request from their users and the new unit is “multiple times faster” than the previous model.  Drobo’s core processor has been upgraded to a newer version of the ARM CPU and it gains two new super-fast Firewire 800 ports (FireWire 400 compatible).  In addition DR say they have “dramatically increased” the performance of the USB 2 port which carries over from the previous design.

In addition to the hardware upgrades the software algorithms at the heart of the unit have also been improved.  A new more efficient method of laying the data down across the hard drives has been found which is adding to the performance gains made by the hardware.  We asked if this improved algorithm would filter through to the original Drobo in future firmware updates and DR confirmed it definitely would.  However this may take around 6 months as they concentrate on the new device for now. 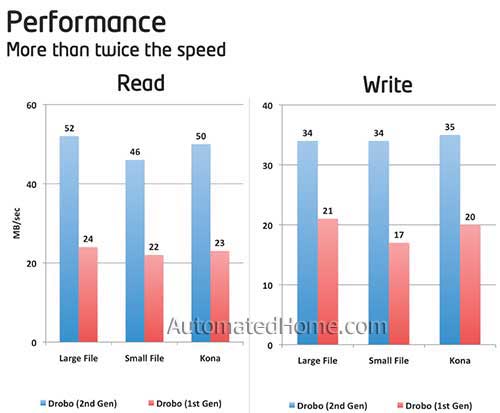 It’s surprising that DR decided not to include an Ethernet interface on the Mk2.  When we asked the reason for this they told us the vast majority of Drobo owners want to use their enclosures as desktop attached storage rather than NAS.  Ethernet connectivity will still be available but requires the purchase of the Droboshare, which remains unchanged.

DR’s own benchmark tests shown below are against some of Drobo’s main competitors.  DR say that Drobo offers a significantly lower cost compared to its nearest competitors, despite now being considerably faster. 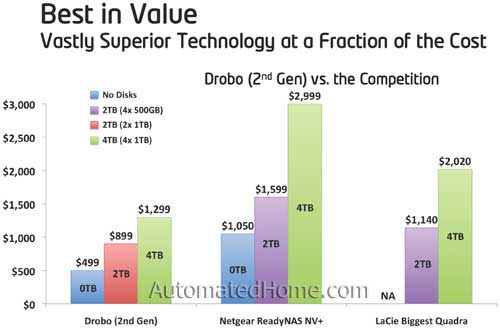 In our review we mentioned you wouldn’t want to use Drobo as your scratch disk for video editing.  But with the new 800Mbps FireWire interface all that has changed.  Drobo will now be a great primary storage drive for any intensive AV editing, in addition to the usual storage duties of the media collector.

Whilst most PCs probably still don’t ship with a FireWire port, Macs definitely do.  Drobo is already a big hit with OS X users and DR tell us Apple users make up around 47% of its customer base (Windows around 51%, Linux around 2%).

With Seagate’s announcement that they are releasing 2TB drives in 2009, Drobo will have an incredible 8TB total (6TB protected) potential in a single enclosure.

The new Drobo has had its price reduced to £299 including VAT and is available in the USA from today and in UK & Europe in the next few weeks.