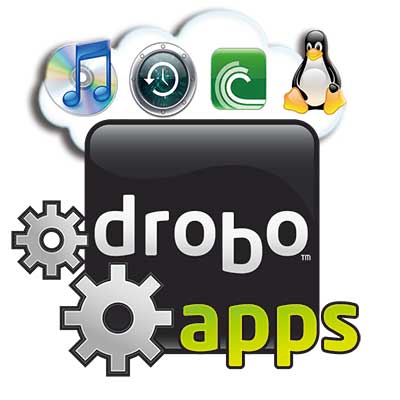 This morning, Data Robotics have officially launched DroboApps.  Since the announcement of the Drobo SDK beta back in July, over 100 developers have signed up for the program producing around 20 applications for the unit. Amongst these are several applications that will already appeal to the Smart Home enthusiast.  uPnP, iTunes and DLNA apps all help to transform the Drobo from a storage device into a media server.

Many if not all of the current applications are free and open source.  However DR aren’t ruling out apps that are chargeable too.  While many applications will require the Linux powered DroboShare (various IP based servers for example), some will be available to run on stand alone Drobos too, or may even be desktop based like the Drobo Dashboard for Linux.

Keen not to upset the “it just works” philosophy, the apps system will not be enabled by default, but will be easily switched on by the more technical user interested in the added functionality it provides.

We asked DR how they got round running multiple apps on the relatively modest DroboShare hardware.  The answer is “Add Swap Memory”, a piece of software that allows you to increase the memory available for running programs by either utilising 512 meg of hard drive space or cleverly a USB thumb drive plugged into the back of the unit.  Running multiple apps, especially something like a busy FTP server will of course have an effect on Drobo’s core performance as a NAS.

DR will provide no warranty or support for 3rd party apps and it will be left to the developer community to vet them for malware.  Some of the success stories in the applications already available include:

Fuppes – A UPnP / DLNA media server, Fuppes will allow DroboShare to stream media to your Xbox 360, Sony Playstation 3 or many other network enabled media players.

f you have a Gigabit Ethernet network with Jumbo Frames then the Jumbo Frames DroboApp changes the MTU level to 9000 on your DroboShare so that you can get  extra performance.  DR say users have reported a doubling of read/write performance from this 1k application.

Time Tamer – Designed to stop Apple’s Time Machine backup system taking over all the space on Drobo, Time Tamer creates a disk image for Time Machine to use that will grow to 2x size of your hard disk, but no larger.  The utility is supplied in a Mac .app file which allows it to work on all disks, not just Drobo.

Many other useful apps like SSH, WOL, PERL, FTP, rSYNC are available now.  DR have already seen a beta version of AFP running on the system too and they are also predicting the command line bit torrent client will soon have a GUI front end.  The DDC (Drobo Developer Community) is free to join and we look forward with interest to see what other applications can be created for Drobo. 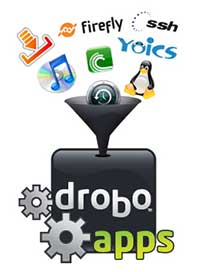 SANTA CLARA, CA – October 21, 2008 –Data Robotics, Inc. today announced that since opening up its storage platform to third-party developers in July 2008, 20 DroboApps have been developed or ported for use with the award-winning Drobo and DroboShare. DroboApps enable customers to interact with their Drobo and DroboShare in exciting and novel ways that everyone from typical home users to Linux enthusiasts will appreciate. DroboApps opens up a world of possibilities including, iTunes™ music server, UPnP and DLNA media streaming, BitTorrent™ downloading, FTP and Web server functionality and remote access via the Yoics™ client, among others.

The Drobo Developer Community (DDC) and DroboApps initiatives underscore Data Robotics’ commitment to working closely with the developer community to provide a completely customized experience to every Drobo customer. Anyone interested in developing or porting applications to Drobo and DroboShare can sign up for the DDC at www.drobospace.com/developers.

“The Drobo solves consumers’ ever-expanding need for storage in a simple and reliable way. When combined with Yoics, the stored data becomes instantly accessible from anywhere on the internet,” said Ryo Koyama, President & CEO of Yoics. “The application we created as part of the Drobo Developer Community transforms the Drobo into an internet appliance, where the data stored on it is available from any web-browser–even the one on your iPhone.”

Some examples of DroboApps available today include:

“We are very excited about the community’s rapid response to our developer program in creating and porting DroboApps for Drobo,” stated Dr. Geoff Barrall, Founder & CEO of Data Robotics. “Unlike traditional storage devices that limit users to a fixed number of features or applications, Drobo now provides an open environment that allows nearly limitless expansion of new functionality. Users will no longer have to choose their storage solution based upon fixed feature lists.”

To view the full suite of DroboApps currently available for download, or create and submit a new application to the DDC, please visit www.drobo.com/droboapps“