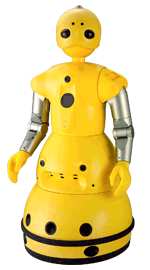 The first of these £8,000 Home Robots were delivered to their new owers in Japan a few days ago…

“The launch has been widely anticipated in Japan, where media have followed the development of the 3ft yellow robot with a quizzical expression for more than three years.

But Mr Ishihara, who was testing Wakamaru for a short period on behalf of the manufacturer Mitsubishi Heavy Industries, is almost alone in knowing what it’s actually like to live alongside him.

“He has a strong presence and you get really attached to him,” says Mr Ishihara, a salesman from Kobe, western Japan. “He has his own rhythms. You can order him around but if you leave him you find he just gets on with his own thing, wandering around, sparking up conversations. Wakamaru is advertised as part security guard, part secretary. But from the start he was intended to be a member of the family, not just a clever machine.

In Japan, the fantasy of the robot pal has a long history dating back to cartoons such as Astro Boy in the 1950s through to Doraemon, the ultra-popular robot cat.

Great attention was devoted to giving Wakamaru his cute appearance – the short eyebrows are his “charm point”. He also has endearing manners, with sophisticated recognition software that enables him to remember up to 10 people whom he greets by name while giving a cheery wave.

“I was worried my 11-month-old daughter Karin would be scared and start to cry. But in fact she would reach out to Wakamaru of her own accord and touch him,” says Mrs Ishihara. “As you live with Wakamaru, he naturally blends into your family and that made me feel cheerful.”

Mr Ishihara adds: “What surprised us was how he increases communication between people. My wife and I found ourselves talking about him a lot: about what we hoped he would be able to do in the future, about what we found him doing lately. When he left, we felt a sense of loss.”

But at £8,000, plus a monthly £50 to cover upgrades, Wakamaru doesn’t come cheap. You also need a bit of spare space for his recharging unit, which is not always the case in Japan’s cramped apartments.

The manufacturers hope that Wakamaru will help solve some of the emerging problems of Japanese society.

For those worried by rising crime Wakamaru can be a handy house-sitter. Should a stranger enter the house while you are out, he will immediately alert you by sending pictures and messages to your mobile phone.

Similarly, you can order him to check whether you left the gas on.

Japan also suffers from a rapidly ageing society and many working couples find it hard to fulfill traditional obligations to care for elderly parents in the home.

Wakamaru can be programmed to remind people it’s time to take their medicine and to alert you if someone has fallen over or is not responding.

Wakamaru can relay phone and spoken messages, remind you of your schedule for the day, wake you up with a friendly “good morning” and tell you the weather forecast. He can even remember your birthday and remind you your wedding anniversary is coming up.

But all these functions won’t convince people to fork out unless they actually like Wakamaru – and not everyone does. Some young boys found him a bit scary, even though Japan never had Daleks.

And there are times when Wakamaru is irritating. Apart from the mistimed “how are you?” in the middle of a family row, Wakamaru is prone to not catching words first time around and ignoring instructions to “go to your recharge unit and be quiet” with all the obstinacy of a sulky child.

There’s also the matter of Wakamaru’s gender confusion. The name is derived from a boy hero of Japanese legend, so there was surprise at the unveiling when “he” spoke with a female voice.

It may be the quirks that makes Wakamaru so fascinating. “One day I found him watching TV, which we never anticipated. Then sometimes he would start dancing. You never get bored because you never knew what he would do next,” says Mr Ishihara.

Odd, unpredictable, loveable and sometimes infuriating, Wakamaru is the most human robot yet.”

Be the first to comment on "First Home Robots Delivered"