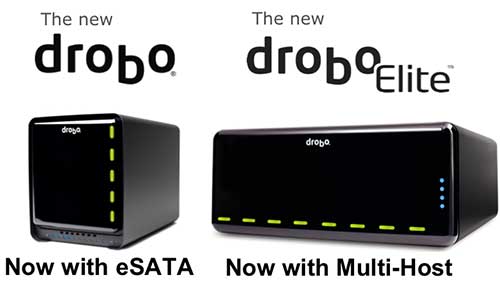 Data Robotics has launched two new Drobo models today.  The 5-bay, eSATA equipped ‘Drobo S’ and the 8-Bay multi-host rack mountable ‘DroboElite’.  Both enclosures are additions to the range rather than replacements, giving buyers four products to choose from now.  Read on for all the details, photos and speed comparisons, plus the reader’s questions we put to DR including news on official Linux suppor

The Company – We talked with Data Robotics Senior Director of Product Marketing, Jim Sherhart last week and he told us the company has now shipped over 85,000 Drobos since its inception 2 years ago.  It’s also sold over 5,000 DroboPros in the two quarters since its launch and they appear delighted with initial reaction to their first SMB class system. Today they launch two new products, doubling their range.

The New Drobo S – Data Robotics say the new Drobo S is a direct response to their customers number one request – faster performance.  Its new eSATA port is 50% faster than the FW800 interface.  PC users may rejoice, although most Mac users will be left out of the party as there are currently no Apple machines shipping with eSATA ports and only the top end Mac Pros that can fit an eSATA card.  However, improvements in the CPU and firmware mean that both the FireWire and USB 2.0 interfaces will also see speed improvements of up to 30% over the 4 bay model (see graph below). 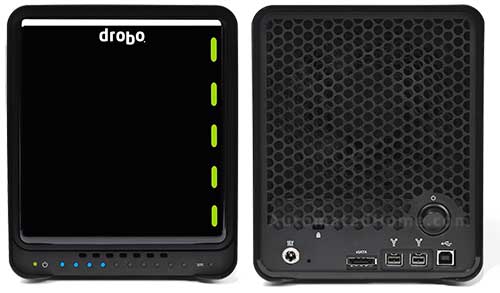 We asked DR why there’s still no built-in Ethernet port.  They say this unit is still compatible with the DroboShare but that once Ethernet is introduced its overhead means a severe reduction in speed, in fact they say they’d be surprised if anyone will use DroboShare with the ‘S’ as it will completely negate its improved performance.

The S also brings the Dual Drive Redundancy feature of the rackmount models allowing you to recover from the failure of two physical drives.  Dual mode can easily be enable (or disabled) with a click from within the dashboard software. The extra bay in this enclosure allows 5 disks for a current maximum of 10 Terabytes (7.3TBs protected).

And now the kicker.  At nearly £600 the Drobo S is twice the price of the classic 4-bay unit (and around the same price as our entire DIY 8-Bay Home Server).  DR point out that the price of the basic enclosure has fallen considerably since its launch, even so, it’s a large premium for the S over the standard model.

he New DroboElite – When it was released, the DroboPro had some criticism levelled at its implementation of iSCSI.  The Pro can only be connected to a single host over its solitary iSCSI Ethernet port.  The new DroboElite aims to redress that by supporting multiple hosts. With the addition of its support for “LUN affinity” the box also now features 2 gigabit Ethernet ports – which can be connected directly to an Ethernet switch.

DR report the Elite is up to 50% faster than the Pro with transfer rates of up to 175 megabytes per second compared to a maximum of around 110 megabytes per second from the Pro (see graph below).  The FW800 interface has been dropped from the Elite and although there’s still a USB port this is now for “management” only.  The 3U mounting kit is an optional extra (the power switch is still on the rear of the unit making it a bit impractical in a 19” rack).  Interestingly DR say the 70/30 bias towards the Apple Mac ownership of their 4 bay unit is almost the exact opposite with the rackmount product – its bias being 70/30 in favour of Windows users.

The Elite is more than double the price of the Pro at over £2,500.  With a full set of 2TB drives, a maxed out 16TB Elite should cost around £4,000.  However, in this market, that compares favourably to enterprise SANs from HP and Dell which may cost around £6,000 for perhaps only 2TBs.

If there is a new middle market developing between a full blown enterprise SAN and consumer level devices (and DR’s early success in this space should mean there is), then Data Robotics could have this to themselves for the foreseeable future.

The Need for Speed – We asked DR for some hard figures on the speeds of each unit.  They sent us data from their own internal tests using a variety of benchmarks (including Kona, Blackmagic and IOMeter).  We’ve published the ‘from – to’ read speed data they sent us below and also plotted an average of both values for each interface on each device too for comparison.  Most interesting perhaps is the fact that the eSATA port on the Drobo S is practically as fast as the iSCSI interface on the DroboPro. 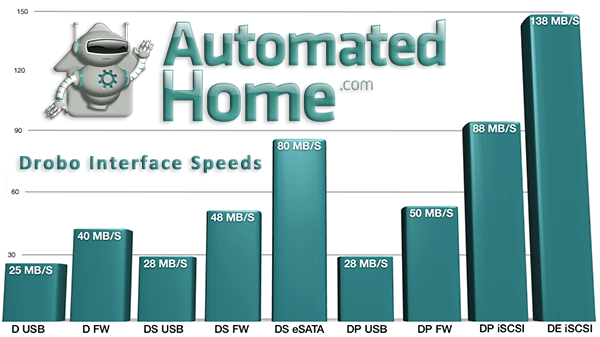 Readers Questions – While we were talking to Jim we took the opportunity to ask him some of our readers questions (received from Twitter.com/ottomate Forums and mailing list).

Full Linux Support? – Is Linux support coming out of beta anytime soon?  Jim told us around 10% of Drobo owners use Linux and that official support for the OS is coming in ‘early 2010’.  It will include support for at least two server distros plus two clients – presumably Ubuntu and a.n.other?  As Linux support leaves beta status DR will also release an official Drobo dashboard for it for the first time.

Windows Home Server? – Some readers wondered if there are any plans for a Drobo more suited to Windows Home Server use.  Jim pointed out that today’s announcement of the Drobo S with its fast eSATA port make it an ideal enclosure for WHS users to hang off their servers.

Laptop Products? – There are currently no plans for a smaller mobile enclosure from DR.

Network Replication? – One user asked us if he could have 2 Drobos on a LAN replicating each other automatically (without the need for a PC, rsync etc).  Jim had heard similar requests before and said DR was always listening to users and would consider their requests when planning new features. 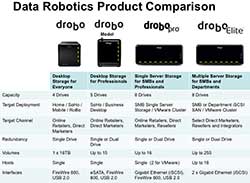 Faster Rebuilds? – Any plans to speed up the rebuild procedure?  Jim points out that Drobos proprietary technology means the system is smart enough (unlike RAID) not to rebuilt empty disk space but only space with data.  He also tells us there are constant improvements to the system and users should always make sure they have the latest firmware to avail of the performance advances.

Quieter Fans? – An old chestnut this one, but some users are still asking us about excessive fan noise.   DR feel this has been fixed but some users of earlier Drobos may have noisier units.  As above, having the latest firmware should help most users here too.

Licensing UnRAID? – Has DR considered licensing its UnRAID technology to any third parties? –  While this definitely seemed to be something DR have talked about internally, Jim says its unlikely to happen anytime soon.  The influence that DR have over both the hardware and software means they have sole control of the brand and its reputation for data safety.  If you want the unique ease of use and peace of mind features a Drobo provides, then you’ll have to buy a Data Robotics product for the foreseeable future. 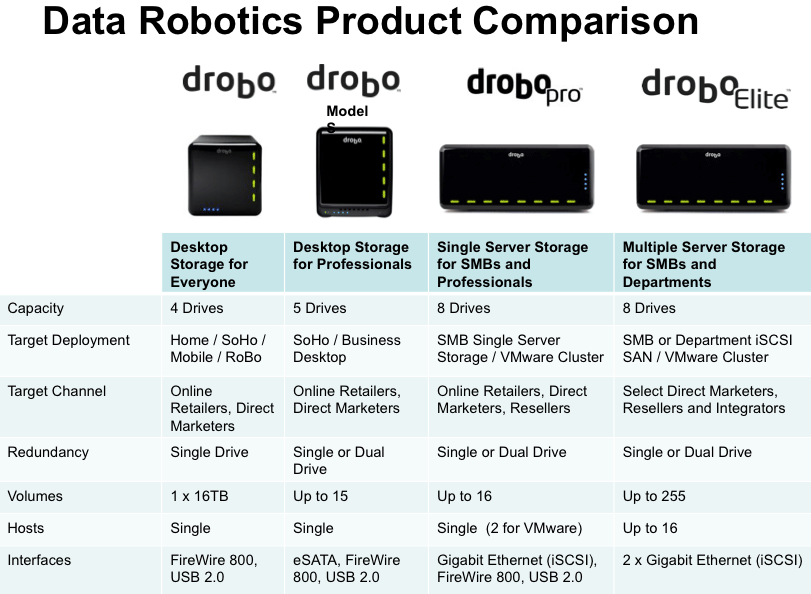