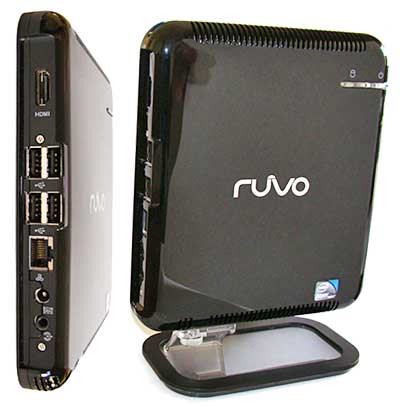 Back in September we brought you a review of the ASRock 330 , an Atom powered NetTop PC running 1080P out to HDMI using XBMC.  Now the LinITX guys are at it again, this time with an even smaller, silent design that does the same job, but at £210 costs even less.

The Ruvo ‘s 1.6Ghz Intel ATOM 230 is a single core CPU compared to the ASRocks Dual Core 330, but with the same ion GPU doing the real work, it runs XBMC pretty much the same way  The RuVo is HDMI only where the Rock is HDMI and VGA – but this should be ideal for its purpose – an inexpensive 1080P HiDef streamer.  The ASRock also has the advantage of an integrated optical drive, however its fan means its not silent like the Ruvo.

The Ruvo has a 533MHz front side bus and ships with 2GBs of DDR2-667.  Despite its size and the fact you’ll want to stream data from your server, rather than store locally, storage is impressive in the form of a 2.5” 320GB SATA hard drive.  In fact when you think about it this gives you the opportunity to fill the machine to throw in a suitcase and take with you on holiday.  The specs continue with HDMI, Gigabit Ethernet, 6 USBs, audio in / out and microphone.

We’d love to see some sort of VESA mount for this thing to allow it to be simply attached to the back of a TV or monitor.

Things never stand still for long and with the tempting $150 ARM powered XBMC player in the works and the Boxee Box on its way the choice may become even more difficult next year.  But for now, if you want some 1080P Silent tiny hardware goodness, then the Ruvo Mini 7 looks like just the job!

UPDATE 23/22/09 – LinITX have just told us they’ve cracked open a Ruvo and it DOES actually have a fan inside.  However for all intents and purposes the unit is as silent as anything fanless we’ve used in the past.