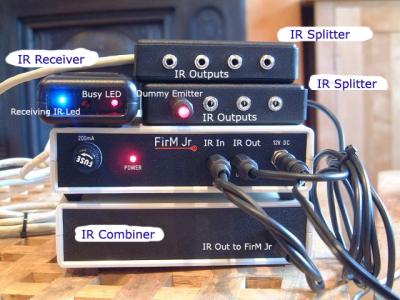 FirM Jr + KAT5 – A marriage made in Croydon 🙂 (Submission by Tony Butler).

Having made the decision many moons ago to move all my AV kit to node 0 (coincidentally, around the time my twin boys were born!), I have long sought the twin holy grails of quality distributed A/V and reliable distributed IR control.

My distributed needs are not that great at present (Thankfully, since there is no affordable A/V matrix doing S-video or better quality on the market yet), so I feed all my sources into:
– A Denon AVR3200 A/V amp for feeding component video + surround sound to the lounge
– A Linn Knekt system to provide audio only in three other zones
– A simple A/V switcher to feed composite (only because the TV does not support S-Video) to the bedroom

Linn aside, the other feeds reach their destinations via KAT5 over CAT5, which addresses the requirement to get quality A/V feeds to the various destinations. The hope is that eventually, all switching will be done via a Matrix switch, but that is some way off yet.  Now, what about IR control? The options, until recently have been as follows:

Recently, I decided to purchase a plasma screen, which would mean that there was now nowhere for TiVo to live and thus it *had* to move to node 0. This in turn meant that my IR solution had to change, since Powermid simply would not control the TiVo reliably.

Following some discussion on the UKHA list, it seemed an answer to my problem was available at last. Frank Mc Alinden, inventor of the FirM, had come up with a more lightweight solution, FirM Jr , an IR repeater system, which (crucially for me) requires no external controller, and no programming (in this sense, it is comparable to a Xantech solution) and which, with a little bit of magic, could be connected to the recently released (and eagerly awaited) KAT5 IR upgrades. This meant that I could achieve reliable wired IR control without using any additional RJ45 sockets, since the existing ones used for KAT5 feeds would also carry the IR signals.

KAT5 IR and FirM Jr were developed completely independently, and not particularly intended to work together, so thinking caps on, and Keith (KAT5) and Frank (FirM Jr) came up with what, in theory, as a viable solution….. which began to arrive shortly after when I received a package from Australia containing pretty my everything I would need from a FirM Jr perspective, apart from IR emitters and a UK spec 12v regulated PSU, which I had “in stock”.

All the kit is in very high quality housings and does not in any way feel “home made”, so first impressions were very favourable indeed. The package comprised the following items:

First steps were to connect it all up “on the bench” and make sure it worked in isolation. I did not have the KAT5 units yet anyway, so the first test was just using the FirM kit. I connected it all up as per Frank’s instructions, fired some IR at the receiver and…. The dummy emitter lit up – hurrah! You can see the evidence in photo 1 – the receiving and busy LEDs are lit on the IR Receiver, and the IR tester is lit to show the IR is being transmitted successfully.

Photo 2 shows the back of the same setup – not very exciting, but included for completeness. 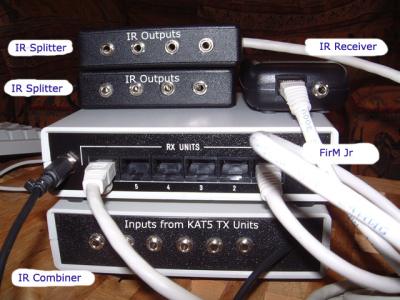 I tried a variety of remote controls in the bench test, and all seemed to work fine, so the next step was to deploy it in the “real world”. I did not yet have the KAT5 IR units, but the plasma screen had arrived and the TiVo had to move to node 0, so I needed to deploy a temporary solution until they arrived….Luckily I had the FiRM IR Receiver, which I deployed to the lounge to control the TiVo and A/V amp, whilst my existing powermids continued to control everything else from both the lounge and the bedroom. Photo 3 shows the IR Receiver in place, just below the plasma screen. I do not know if the screen (a pioneer PDP-435XDE) does not emit much interference, or if the FirM kit is especially resistant to plasma interference, but either way, the proximity of the screen to the receiver caused no problems.

This solution worked well for several weeks until the KAT5 IR upgrades arrived and I could put my final (well, until the KAT5 switcher arrives!) solution into place. This is where it all wet horribly wrong and I thought the KAT5-FirM Jr marriage was off. This was, until now, only a theoretical solution since Frank did not have IR enabled KAT5 units and Keith did not have any FirM kit, and it looked like it was off.

Happily, the problems turned out to be down to a combination of ignoring Frank’s advice and user stupidity, both of which were eventually resolved. I have the following advice to offer those of you who may wish to attempt a similar solution yourselves: 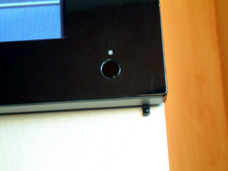 Photo 4 shows the IR Receiver in the lounge – an altogether tidier solution than the FirM IR Receiver, though I must confess I miss having the feedback from the busy LED to let me know when SWMBO is using IR upstairs. “Luckily”, SWMBO is usually controlling the TiVo from upstairs so I can usually tell what she’s up to because I am trying to watch it downstairs too and she has just switched to one of her programs 🙂

I have had this solution working for about 2 months now controlling 8 different devices from 8 different manufacturers and in that time, it has proved utterly reliable. The only problem I have now is to do with learning remotes refusing to learn some codes, but that is independent of KAT5/FirM.

I would not hesitate to recommend FirM Jr to anyone wishing to implement a hardwired IR system, and especially if you want to use it in combination with KAT5 IR, since I know this combination works 😉 Aside from the actual “it works” element, I found the support from Frank to be superb, and he was willing to go that extra mile, building the IR combiner and a custom IR splitter for me – ideal for someone like me with no time and no skills in that area.

Since FirM Jr is an Australian product, exchange rates work in our favour too, and the FirM Jr kit is definitely comparable to, if not cheaper than, an equivalent Xantech setup – eg:

And I’m sure Frank would be happy to quote you for an IR Combiner, whether it is a full-on optoisolator jobbie, or a simple diode combiner. 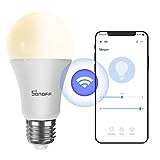 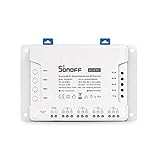