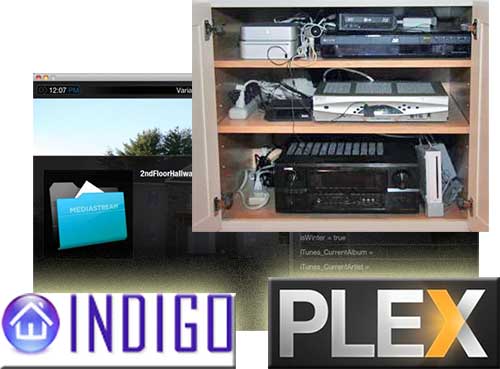 Submission By: Charles Friedberg – Plex + Indigo + Harmony Remote = Home Automation Bliss – Why do it?  About a year ago, I decided to take the home automation plunge and sought out ways to automate my home’s lighting, entertainment and HVAC systems.  After doing a good deal of research, I concluded that the most cost-effective and flexible solution would be to utilitze Perceptive Automation ís Indigo software and Smarthome’s Insteon modules for the lighting and HVAC.

Once I installed all the Insteon devices (which also included a garage door opener), I installed the Indigo software on an iMac in my study, connected the iMac to the Insteon adapter which plugs into the wall and my home automation dreams were off and running!

Indigo also comes with a free iPhone application called Indigo Touch, which is superb as well.   Total cost for home automation of lighting, HVAC and remote control of garage doors for a 4,000 sq ft home, ~USD$3500, and that included all Insteon modules, installation and the software license (I already owned the iMac so I would argue that isnít part of the cost).  Compare that to a proposal from one of the ‘professional’ home automation brands!

With its built-in webserver, and touch application, the Indigo home automation solution is an excellent one, but it requires either a) you have to have your iPhone/iPod Touch with you constantly or b) be at a computer with a browser open and keyboard/mouse on hand.  This was always the case until I executed step 2 of my master plan – a home media center.

A few months back I took the plunge, purchasing a new Mac mini 2.53Ghz with 4GB of RAM ($USD800) and installed the excellent OSX media center software Plex, which is free.  In addition, I purchased a Synology DS209 and two 1.5TB internal hard drives which I configured for RAID1 (USD$550).  I already owned a Harmony 890 remote (USD$150 on Amazon), my Kuro PDP-6020 and a Denon Receiver (AVR-2807), so total incremental setup cost was USD$1350 (plus tax).  With the media center all set up and streaming across my home network, my wife and I began to notice some common behavior.  Often times, we would sit down to watch something off the media center and forget to turn out the lights (for the movie theater effect after all), and we would have our iPhones handy.  Wouldnít it be nice, within Plex, to be able to control Indigo via the Harmony remote?   Absolutely!  Problem is I canít code so off to the respective forums I went. 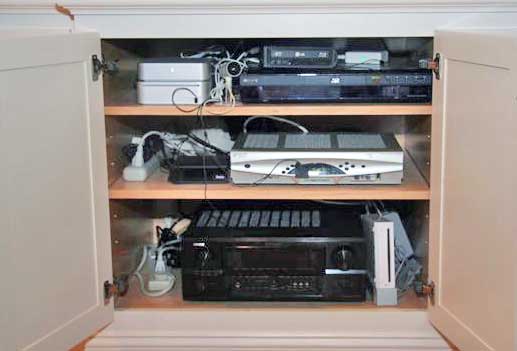 On both the Indigo and Plex forums I proposed this very idea – wouldnít it be great to be able to control Indigo from within Plex?  Fortunately, two other folks thought the very same thing, and began working on an Indigo plug in for Plex, and now, Plex and Indigo users have a solution.

A loyal Indigo and Plex user created the free ‘Indigo for Plex’ plug-in.  The beauty of the plug-in is that not only is zero setup required if Plex and Indigo are running on the same machine, but if Indigo is running on a remote machine, one need only point the plug-in to that remote machineís internal IP address, input the Indigo Server id and password and setup is done!  The plug-in, as can be seen from the screenshots below enables the  user, from within Plex,  to 1) control all devices (viewing, quick-toggling if not-dimmable, toggling and dimming by user-defined increments if dimmable ), 2) control Action Groups (viewing and executing) and 3) control Variables (viewing and editing). 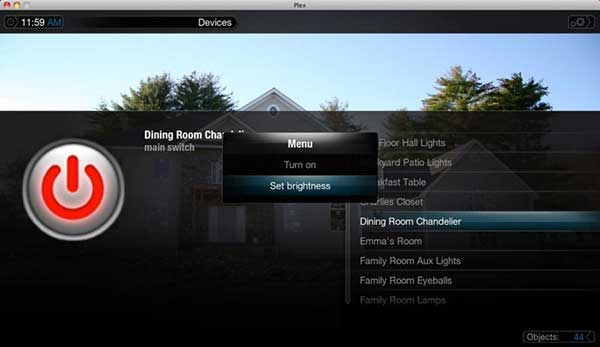 One of the control screens

While HVAC control, and use of Indigoís excellent control pages isnít part of the current release, the author has assured users that itís one of his goals as well if possible.  I should note that I have replaced the plug-in authorís ìstockî images with my own, and that the plug-in was in no way developed by the makers of Indigo, nor is the author in anyway affiliated with the makers of Indigo.  However, Plex and Indigo users now have a very elegant way of controlling Indigo right from their couch using their remote from within Plex.

The makers of Indigo have been very helpful to the author when developing the plug-in and have suggested that they will be enhancing their API to enable the Indigo for Plex plug-in to do even more in the future. 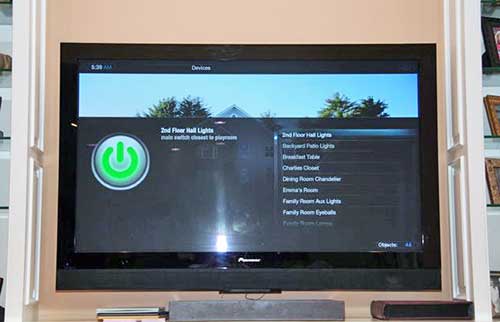 The Plex / Indigo Home Automation Interface on our TV

Up next some Apple scripting that will execute action groups when a media content is played (although I have been pestering the plug-in author to build that into the plug-in).  For example, if Plex starts to play a movie, Indigo would automatically turn off lights in the appropriate room – all with the touch of single button on my remote, from the comfort of my couch!  Functionality that only a year ago would cost tremendously more, and require professional installation.  Dreamers can dream! 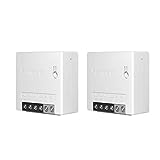