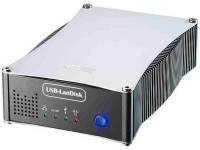 What is a NAS? – NAS stands for Network-Attached Storage. Basically just a box with a hard drive (or multiple drives) which plugs into your LAN to provide additional storage which can be accessed by users on the network. Read the full Wikipedia definition HERE.

Why Do You Need a NAS? – Most of us are gathering more and more digital media -“ MP3s, Movies and Photos. Domestic networks are becoming common place now as many of us have more than one PC at home. This combination of factors makes it very desirable to have a large central storage device on your LAN, that can be accessed by all the machines in the house whether PC, Mac or Linux, and externally via the Net as we’ll see later. If you currently have a PC running 24/7 then it’s a certainty that using this NAS will save you money as a dedicated PC based fileserver can cost more than you probably realise to run.

We measured the unit using a tiny 18 Watts during sustained reading and writing, compared to around 150 watts for a modern PC. If you were to run both devices 24/7 the annual running cost for the NAS would be around £17.00 compared to around £145.00 for the PC! It’s also possible to set the drive to spin down after a configurable amount of time (5 – 60 minutes, 0 to disable) for further savings. It’s worth mentioning that the Sonos whole house music system (see our long-term review HERE) is designed to run without a PC and so this unit would be ideal to store all your music in a Sonos setup. 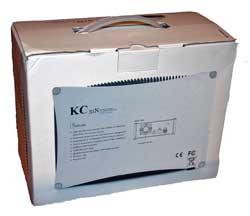 Mapower NAS
Click pic for larger version
Installation – Some NAS units at this price can appear quite basic, but the KC-31N’s stackable design has a quality look to it. While the unit does have a small 4 cm fan in the rear, the aluminium fins of the case also help with passive cooling. In our tests (with a 5400 RPM Maxtor drive), the case hardly even got slightly warm to the touch. Setting up this NAS was a 10 minute job. The kit comes complete with an allen key, and 4 hard drive screws, so you don’t have to go hunting for anything other than a star screwdriver to complete the job. The case opens to reveal a couple of circuit boards, one at the front and one at the rear of the case. It’s amazing to think that these two tiny boards turn an ordinary hard drive into what really amounts to a complete fileserver! The system can take any normal 3.5″ (PATA) IDE drive up to 400 GB. Set your hard drive to master, drop it in, connect the IDE ribbon cable and the power connector and secure the drive with four screws. Put the lid back on the case and tighten the four hexagonal screws and you are ready to setup the drive. 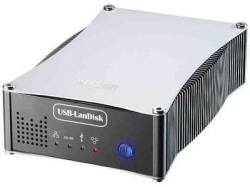 The next step is to configure the system. Connect the power adaptor (an in-line transformer similar to a laptop power supply) and then connect to your PC via the USB 2.0 port (cable included) or 10/100 Ethernet (cable not included) and hit the power button with its fashionable blue LED. I used my laptop for this stage as the unit has its DHCP server enabled my default, making it easy to configure when directly connected to a PC not on a LAN (you don’t need a cross over cable for this). 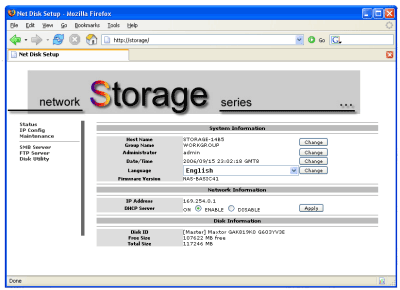 Once the PC has obtained an IP from the units DHCP server it’s simply a matter of opening your browser and going to http://storage to view the web interface. Enter the default username and password (admin and admin – best to change that asap) and you are in! 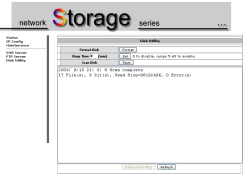 I disabled the DHCP server (my router takes care of that) and changed the unit to a fixed IP. Formatting the drive is carried out through the web interface. The NAS uses the FAT32 file system and it only takes a few seconds to format.

Dance the Samba – Once up and running the NAS just appears as any other Samba share on your network. Here are a few screen grabs showing us accessing the NAS from a Windows Vista PC, an OS X Mac and an Ubuntu Linux box. 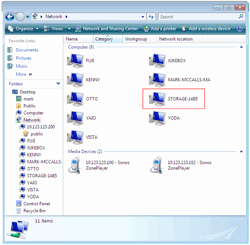 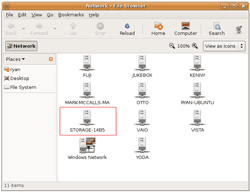 Viewing the NAS from Ubuntu
Click pic for larger version

Providing users rights to certain folders is set through the web interface. Creating a new folder can be done from the Samba screen too, or just through the OS of your computer. After the password has been setup only users with the password will be allowed access to those folders. Folders without passwords are open to all. 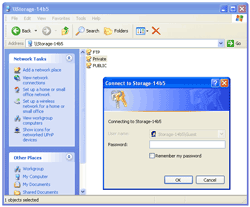 FTP – By plugging the unit into your Broadband router or a switch attached to it, you can also easily make all your files available from anywhere in the world via its built-in FTP server. FTP accounts are simple to setup with the administrator able to choose username and passwords for each as well as allowing or disallowing anonymous FTP clients to connect. You can also configure the port the server uses which some may feel reduces the attacks on FTP servers on the standard port 21. You’ll need to forward whichever port you choose in your NAT router so that it points to the IP of your NAS. 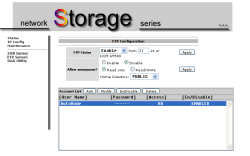 I’ve taken our unit to the home of a family member and I am using it to store a backup of all my important documents and digital photos. I’m using the free version of SyncBack which performs an automated nightly backup to the FTP server. This is another ideal application for this unit, an inexpensive way to have a safe, off-site backup!

What Could Be Better? – Where budget NAS units do tend to fall down slightly on their full-blown PC counter-parts is in speed performance. In our test it took just over 12 minutes to copy 2.5 GB of data off the KC-31N to a PC. This compares to around 6 minutes from PC to PC across the 10/100 LAN in the Automated Home labs making the PC exactly twice as fast in our un-scientific test. However unless you are regularly moving huge amounts of data back and forward this is unlikely to cause any real world issues. The unit is more than fast enough to cope with streaming video and audio (to multiple clients simultaneously) as well as regular file serving and backup duties. With 750 GB drives already on sale and the 1 terabyte drive rumored to be available before the end of 2006, we’d have liked to have been able to fit a drive bigger than 400 GB. Other nice features like gigabit Ethernet and a USB port to allow the addition of an external USB drive to be plugged into and shared by the unit would be good, however, at this price we really can’t grumble at the features of the KC-31N. 400 GB is a huge amount of space and for most people this will be more than adequate. (If you are a legacy computer user and have a collection of smaller hard drives that you still want to use instead of replacing, then you may want to build a PC based NAS like our project HERE). 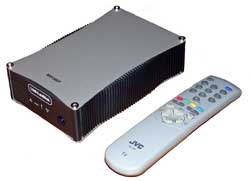 Support – The unit shipped with an older version of the firmware so I obtained the latest (currently v41) from the Mapower website HERE. The firmware update didn’t working using FireFox but worked fine with IE. As well changing the web interface to a much nicer font and cleaner looking page layout, V41 apparently allows files to be up to 16 GB each (up from 4 GB in the old version) and adds support for Intel powered Macs as well.

Conclusion – Network-attached Storage was once priced at a level that made it really only suitable for large corporations. But now NAS, like many other technologies has come down in price to a level that makes it practical for the masses. For most users, a NAS has many advantages over a PC. The simplicity of configuring the system through a browser interface coupled with the stability, reliability and lower running costs make a NAS a very desirable choice. If, like us, you have a selection of spare hard drives lying around, then you can build your own budget NAS for £75 too.