Submission by Andy Powell – Many moons ago Graham Howe flew many a miles to organise the shipping of the Dell (DDAR) and Rio (the original) networked mp3 players from the USA to the UK and beyond for the UKHA community.

Since then I’ve been looking for a replacement for the original server software which quite frankly sucked, couldn’t cope with large numbers of tracks and wouldn’t run as a service.

Then along came XPL, a home automation protocol, and it appears almost immediately Tony Tofts began work on XPLRioNet. The XPLRioNet software made a difference, it allowed for greater library sizes and offered a number of different interface methods such as a web interface, XPL commands. It was wonderful. XPLRioNet then began to morph into XPLMediaNet because Tony was adding support for other devices, eg Hauppague MVP, ExStreamer, Hauppuage MVP and SliMP3. Somewhat supprisingly one day it seemed to all disappear there was little or no mail on the dedicated yahoo group and I thought it was gone forever. Then I noticed Tony’s site had changed, and now, there was something called MediaNet.

So now we have MediaNet. I have to be honest it is just too good to miss. Although a complex application, its use and configuration is a breeze with nothing more than a simple text editor required. The MediaNet application actually consists of a main application using a plugin arhcitecture to add support for things like devices, interfaces and sources etc. This means that as new devices appear plugins can be written without having to do a new application release. What’s more, Tony has released some of the source code (in particular for the plugins – although Tony does say he’s looking at releasing it all). This means you can easily build your own plugins for hardware or software you might have.

The plugins are divided into a number of categories:

Devices
The current set of supported devices (things that get music and/or video from MediaNet) is: Sources
The sources define which types of media are available to the MediaNet application, for example Music, Video, Shoutcast streams

Helpers
Helpers are used to provice special functions to the MediaNet appication, for example Text to Speech or generating Pronto .CCF files.

Interfaces
Interface modules are used to control MediaNet and the devices that are attached to it, for example a Web interface or the XPL protocol. Again, you can develop your own interface modules if you have some esoteric hardware.

Support
The support plugins offer additional functionality to the application,eg DHCP, TFTP support to name but a few

Transcoders
Speak for themselves really. Essentially they allow the conversion of media files from one format to another. For example if you had a device that only supported Ogg files but everything you had was stored in mp3 format then you would use a transcoder to convert from mp3 to Ogg (on the fly). 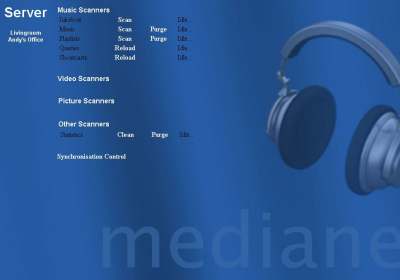 Setting up
The setup process is fairly straight forward, you download the installer and run it. Once the application and modules are installed you can begin the configuration of the modules you want to use. Each module can be enabled and disabled individually – so YOU get to decide which ones are loaded.

Since I only have Rio’s running at the moment I was up and running in a matter of minutes (bar a typo I’d made in configuring 😛 ) Essentially all I needed to do was modify the medianet.xml file to tell it where my music was, modify the rio device xml file to enable serving music to Rios and then start the service. After doing that I fired up my browser and pointed it at http://localhost:8080 and kicked off a music scan. Depending on the size of your collection the scan will take a few minutes (about an hour for me) and from then on you can select your music etc. You can also do a “jukebox scan” which is just beautiful.. (we’ll get to it in a second). I did have some problems during the scan but as it turns out this was due to corruption of a couple of my mp3’s once removed and the scan restarted everything went swimmingly. You can turn on logging for the music scanner so that you can see if there are any issues. Bear in mind you really should have spent the time while ripping your CD’s to have put the correct tags in your files, if you didn;t do it when you ripped them you can use Tag and Rename to search and set them for you – without needing to reinsert the CD.

The Fun Part
The jukebox plugin is by far my favourite, and it’s just begging for a touchscreen. Many ripping applications allow you to grab cover art – ie a picture of the CD sleeve and save it in the same folder as the tracks – You can also use something like “Album Cover Art Downloader” to get them after the fact. In jukebox mode you browse albums, artists or tracks using the CD cover picture (see picture below). If you click the album cover you are presented with a larger version along with a list of the tracks on it. You can also click the album name to have the jukebox play the entire CD. 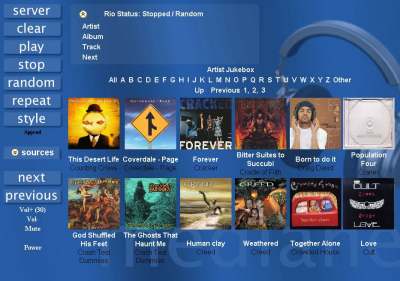 It get’s better
I have 4 Rio’s dotted around the house by simply switching them on MediaNet sees them and adds them to the list of available controllable devices. Each can be controlled from the web interface or via any of the interface modules installed and configured, what’s more you can sync them – bundle them together to act as one. This is one of the best features for me. You add the devices to a Sync group and then control that group, so any music I queue to play gets played on all of the devices, and in perfect time too! I’ve tested the syncing to see if theres a difference by standing in the doorway of the livingroom with my office Rio and the livingroom rio playing one ear hears the office Rio the other the livingroom one… Now I work ing VoIP and i know lag and latency when I hear it and I hear none. Even ater a good hour or two they are still in perfect sync. Awesome.

You can also perform queries on your collection, setup playlists reorder playing songs etc… I’ve only been using Medianet for a few days and already I love it. Tony is constantly adding to and fixing any buglets that people find and is very quick to reply with help etc in the Yahoo group. I only hope that this little review highlights MediaNet to those that until now have been totally unaware of its existance, I for one am glad I found it 😀