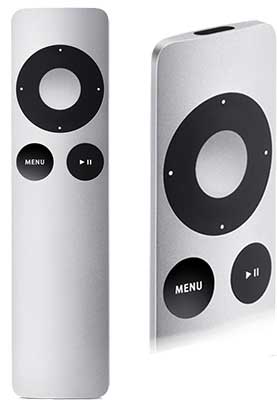 Apple’s diminutive infrared remote control was replaced a few weeks back (along with the launch of a raft of other new hardware).  The new unit leaves the old white glossy plastic look behind and adopts the brushed aluminium finish of the rest of the modern Mac range.

As with the previous remote, the new one will control any Apple products introduced in 2005 or later, that have a built-in infrared (IR) receiver.  This includes the Apple TV, iPods / iPhones (with the universal dock) the Mac min. iMacs, MacBooks and MacBook Pros (note the latest plastic unibody MacBooks unfortunately no longer have an IR receiver).

The profile of the remote is oval, similar to the latest iPod nanos and its longer shape (up from 83 mm long to 120mm) fits better in your hand that the previous device.  The sleek, cool metal feels more substantial too, but without losing its overall svelte good looks.

The visual clues lead some to conclusion that the new device was going to have a scroll wheel, but this is not the case.  So no touch or multi-touch capabilities in the MkII remote, but who’d bet against it in the MkIII ? 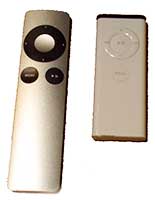 The new black buttons are much more contrasty to look at, although most people will navigate this remote by feeling their way around, something that’s so difficult to do with a modern touch screen remote (indeed we tend to use the Apple Remote when using Plex rather than our TSU9600).

Unusually for Apple designs in recent years the new remote has actually grown an additional button over its predecessor.  The previous single button that was used for Select/Play/Pause has now been split into a separate select in the middle and a new plat/pause below beside the menu button (both the select and the menu button are concaved to aid finding by feel).

This was a necessary addition though, meaning media can played/paused without having to navigate back several screens in front row or Apple TV for example.

As well as controlling your media playback from Front Row, Plex XBMC, VLC etc the clicker can also be used to control your Keynote presentations.  IR range is excellent as with the previous model, allowing us to control our equipment without have to point the device directly at it.

Access to the battery compartment has been simplified and like the Apple Wireless Keyboard, now just requires a coin to open the CR 2032 battery door.  If battery life is similar to the white remote then you’ll be measuring it years rather than weeks or months.

So then, it’s the sort of thing we’ve come to expect from Apple in recent times, a simple, elegant and minimal design that works beautifully.  In fact the one thing that is surprising about the remote is the price.  At just £15 it’s probably the cheapest Cupertino classic you’ll ever buy!

Be the first to comment on "New Apple Remote Review"