It’s not often there’s a new style X10 device around to review, but as it’s Christmas.

The new X10 Mini Controller (MC10) is an all white affair. The colour and shape are a tad more 20th Century than the previous mini-controller, but maybe not quite 21st Century yet.

The controller has ON and OFF buttons for four unit codes. A sliding switch allows these buttons to either controll unit codes 1 to 4 or 5 to 8. While the codes 9 to 16 are missing, anyone with a smart home controller setup would easily be able to create a macro that can be trigger from the mini controller. 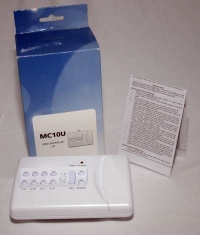 A hinged panel on the right side of the unit opens to reveal the normal code wheel used to set the house code (A to P).

Nice big anti-slip feet on the base of the unit help to keep it stable on a bedside table or whatever flat surface you sight the unit.

If you intend to use the device as, for example, a beside controller it may be wise to set the house code wheel to an unused house code and use it to trigger macros.  A red LED remains lit for the second or so while the X10 command are issued. In addition there are is a rocker switch to controll DIM and BRIGHT functions.

The new style unit is A useful device in anyone’s X10 setup and at around £22 it’s an inexpensive upgrade to the old mini-controller too.